We are happy to introduce CO-WC’s new partner Refugio, a sharehouse organized by Berliner Stadtmission. Embracing 40 people from all over the world living together and supporting each other, it’s become a place of openness and respect, giving and sharing. From now on, you will see our sign on the door of the unisex bathroom in the Café Refugio. With café manager Andreas Romeike, we talked about Refugio, allgender bathrooms and CO-WC.

CO-WC: Hello Andreas, what is Refugio?

Andreas: We founded Refugio in 2015. The idea was to offer a place where people live together and share ideas-in the context of refugees. Integration is important, but it takes more than just to fill large halls with 2000 people in need; we needed to bring them together. Then the idea of this house was born. We have 40 people, 20 from Germany, 20 from other countries (not necessarily refugee-only). The café is a bit of the face of the house. It is an open place for people to communicate with each other, since we need a private atmosphere in the house. Here you see, lots of people are coming and going. You can get all questions answered, get to know others, or just have a cup of coffee. Actually, the cafe is part of our business to run the house.

CO-WC: Refugio is a project of Berlin Stadtmission. Please tell us more about it?

Andreas: The Stadtmission is a part of evangelical church, and it’s one of the largest social organizations in Berlin. It has several refugee homes, the largest emergency shelter and more. They are actively involved in social issues and offer hands according to Christian values. This also applies to our house. We keep Christian values in us; at the same time, this institution is inter-religious and multicultural. We see diversity as something positive.

CO-WC: The residents are half from Germany and half from other countries. We love to know why.

Andreas: It’s important that newcomers get an access to our culture and local people for different supports and social networks. Meantime, it’s equally important for us to learn new things people bring along: culture, language, religion, festivals, food, etc. This is the primary concept of Sharehaus. Not only do we share festivals and talents, but also practical things like pens and books. 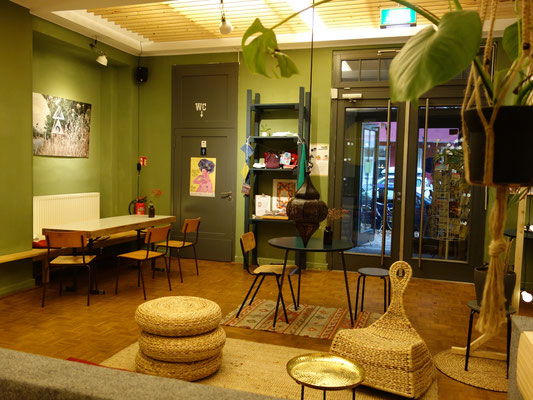 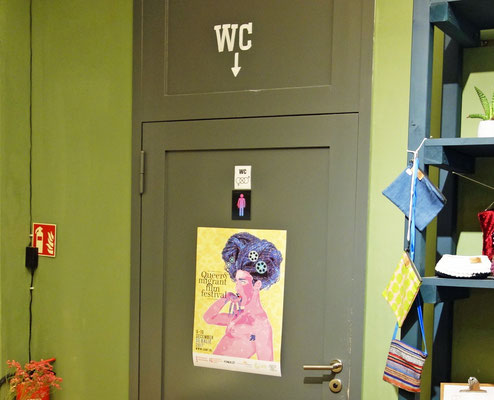 CO-WC: Let's talk about your restroom. You already have a unisex toilet. Was it planned?

Andreas: With legal reasons. This building used to be a retirement home. Everything was designed to accommodate persons with disabilities, also were the toilets. There were three bathrooms in the beginning: one for men, one for wo- men, one for the disabled. We decided to keep one for the disabled as an all-gender bathroom on the ground floor. It's roomy, after all. Of course, you will find additional gendered bathrooms on the 1st and 2nd floor. This is mandatory according to laws.

Andreas: Well, I'm used to it as well. It does not happen very often that I go to the lady's toilet (laughter). We have women's toilets on the first floor and the men's toilet on the second floor. It was originally designed when it was a retirement home-the toilets were not separated because they were staff-only. And right next to the women's toilet there is the club „querstadtein“ and club „Givesomethingbacktoberlin“ upstairs. In both places, we (men and women) work together. We simply use whatever is available. That is, when you go to the bathroom, you never know if a man or woman is sitting next to you. I'm pretty sure I'm sometimes sitting next to women, feeling totally strange. You're still like that somehow. I can't tell exactly why, but it's different. So I can imagine there are people like me out there.

CO-WC: Did you have problems with your All-Gender Restroom? Some cultures might be heavily burdened with gender norms.

Andreas: We have no problems. I think it’s because we are multi-religious and multi-cultural in the house. We don’t welcome people with strongly conservative or biased views. People coming here are open-minded and ready to learn differences. I think, the concept of unisex toilet fits best here because it goes well with “liberal” and “new.” We are tolerant people and we do appreciate one another. 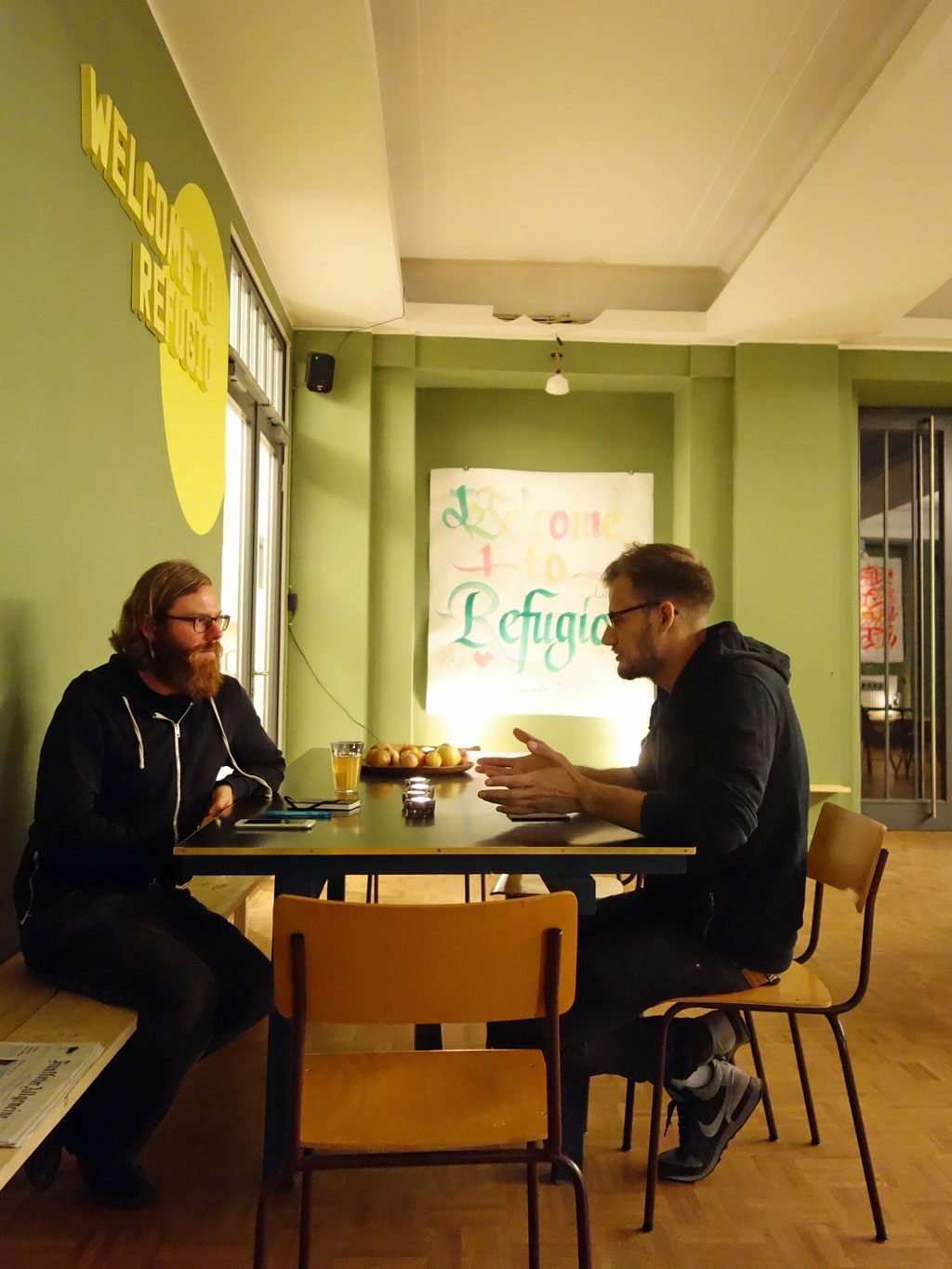 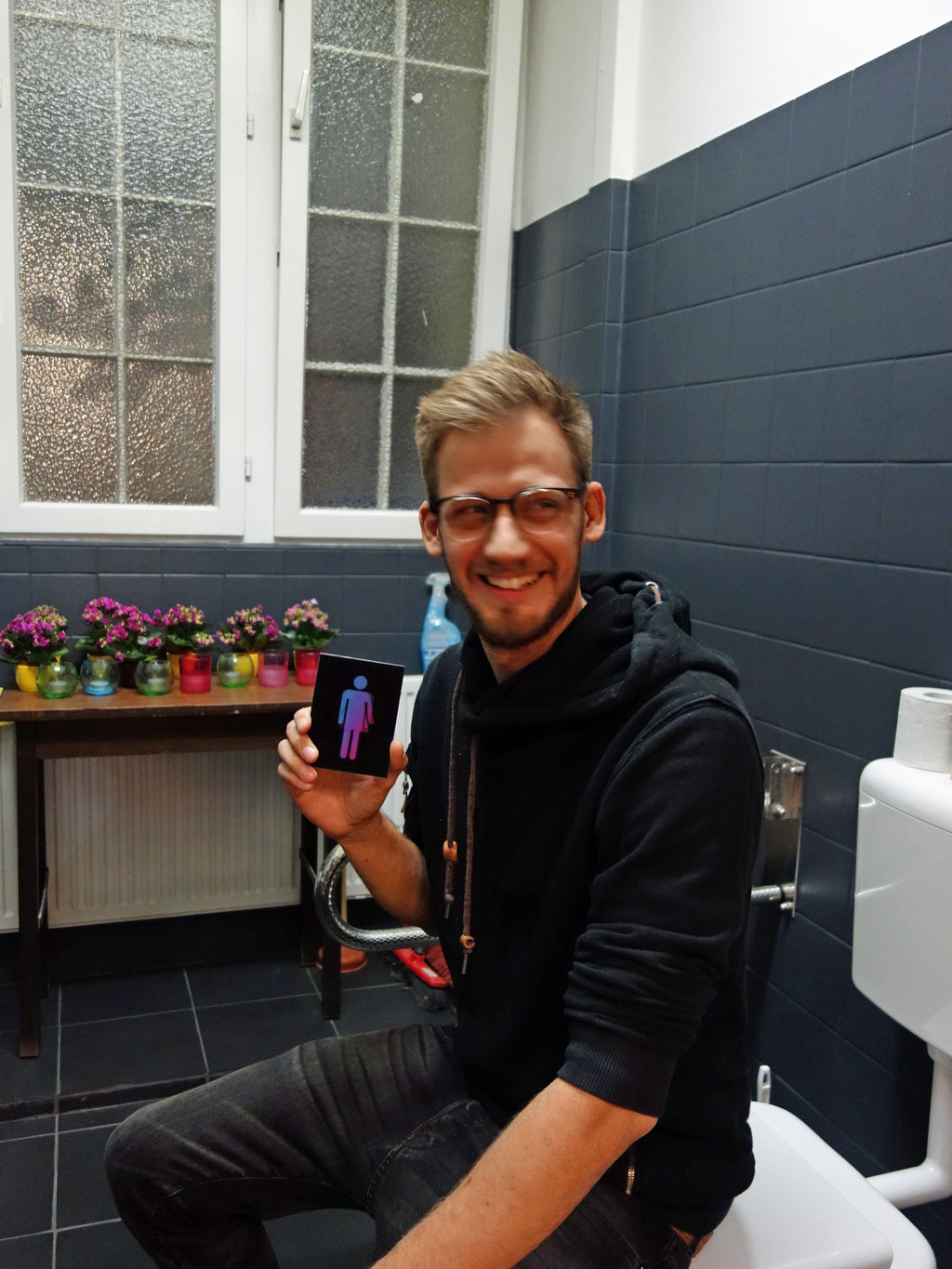 CO-WC: We put an emphasis on respect. Tolerance means, “OK, I get it, but I’m not in.” There is always a distance. Here in Refugio, it’s more than just a tolerance. Living together and appreciating each other, you show us how integration should really work. This is closely linked to what CO-WC tries to do.

Andreas: Sure, it's a bigger thing to respect a person than to tolerate. It might take numerous discussions and disputes to achieve it. We cherish lives of others for being different. Or despite being different. Once we learn to respect others, there’s been a progress, indeed.

CO-WC: Our sign uses the old, traditional images of man and woman because we don’t quite believe in ‘tabula rasa.’ The rigid framework of heterosexuality has gradually shown cracks and scars, but it’s nevertheless vivid throughout our culture in general. CO-WC sign repeats the traditional signs, but it questions and confuses their fixed meaning by wiggling themselves. Our sign tells that we are not finished products, but living beings continually discovering and changing. With our project, we expect to build up bridges for all people of different orientations. One thing we have in common, as CO-WC speaks out loud: We are not over and done but in the flow.

Andreas: This is important to me, too. There are differences and stuff you can’t simply overlook. That's why I find it cool to talk openly about this matter. If everything is tabula rasa, one wouldn’t even need to discuss a thing about it.

Andreas: It’s cool, really. I’m very curious about your app, too. Of course, the legal restrictions are a disadvantage, I mean cafes with a certain size are bound to have separated bathrooms. But I think it's a nice start to catch attention. It’s a lovely sign and the idea behind is great as well. When more places join the project and the sign is shown again and again in cafes or museums, for example, then it gains a recognition.

CO-WC: We thank you very much.